A distinctive hike through old, forgotten footpaths on hillsides & untouched rural landscapes, passing by Thapsana Monastery and the valley of Vounia to end with an exploration of the ancient marble quarries in Marathi. Also includes visit to the 16th c. Aghios Minas monastery – can be extended to 6h30m circular tour.
Level: Moderate

Description  After meeting at Paros town (aka. Parikia) main square, we take a short tour of the traditional settlement before getting on an uphill, concrete-paved road to the hills of Kakapetra. As we leave the town behind and get on our way towards the mountains, the road turns to a dirt track, which eventually turns into a footpath.

The footpath gets narrower as we walk through a ravine, surrounded by fragrant bush such as sage, oregano, savory and thyme, as well as cistus, lampwick plant, Jerusalem sage (Phlomis), Spanish broom, and trees like juniper, wild olive and cypress. In springtime, the hillsides are multi-coloured, dotted with all sorts of wild flowers (poppies, anemones, irises, lillies) and herbs; what is especially striking on this route is the multitude of the tall lupin flowers, forming purple carpets in the olive groves on the sides of the ravine. Exiting the walled but sometimes rugged footpath just below Thapsana monastery,w we walk on dirt road before entering another centuries-old footpath. This mild, downhill path goes through olive groves, vineyards and some grain fields. Going past some old, crumbling farmsteads, we are reminded of the times when the green valley of Vounia (mostly desolate now) was a lively rural community, served by the same walled footpaths we walk on.

The path gets wilder as we descend towards Vounia, with more greenery and thriving bushes. Our route then passes through some more olive groves, barley fields and vineyards some of which are still cultivated. The tranquil gentle agricultural landscape is dominated by the centuries-old ‘pezoules’ all around us (dry-stone hillside terraced fields). After a short scramble through a sometimes rocky, dry-stream bed, we pass by a solitary chapel and pause for a snack in the shade of a large oak tree, a rare and amazing sight on Paros as in most Cycladic islands.

From Vounia, we continue on a mildly uphill north until we reach Aghios Minas, a recently restored but uninhabited 16th-century walled monastery above the village of Marathi, and a fine specimen of the post-Byzantine fort-like monastery typical of the Cyclades. After a tour of the monastery (including some anecdotes and tales from the monastery keeper), we continue downhill on dirt and gravel tracks to reach the Cave of Pan, one of the two ancient marble mining caves. Putting on headlamps and taking necessary precautions, we descend in the ancient marble quarry, where the prized ‘lychnites’ marble was excavated in classical times to be used in masterpieces such as the Venus of Milos, the Hermes of Praxiteles, the Acropolis Kore, the Nike of Delos and the Nike of Samothrace. Up next, we walk on winding trails through lentisk bushes, to the Nymphs’ quarry, open as a huge mouth in the rock, and descend to find the Olympian gods’ relief (350 BC) at the cave entrance. After an optional visit to the marble carving workshop of a local craftsman, it’s high time for a hearty ‘Taste of Paros’ wine picnic in the yard of a nearby chapel, cooling off in the shadow of tall cypresses. After our picnic, we return to Parikia by bus/transfer.

As an extended, more demanding version (circular route, 18 km), we can continue after the ancient quarries site along the medieval Parikia-Lefkes footpath (widened in parts to a country lane) that goes through the flat and serene grain fields and orchards of Marathi. A short uphill scramble around the wooded hills above Elitas and we are on our descent route through some rougher shepherds’ trails; from Elitas onwards, we walk on dirt track, asphalt (metaled) road & trail back to Livadia beach and Paros town.

In a nutshell  [The inland hike that has it all!] Countryside/hiking/views/history, moderate difficulty (with soft caving adventure!), distance 12/18 km, duration 5h/6h30m (with stops & visits), elevation ±400 m. 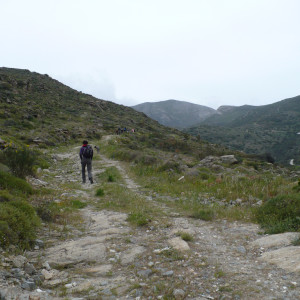 Up the hills off Kakapetra 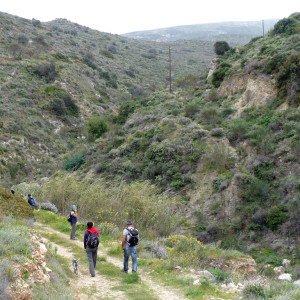 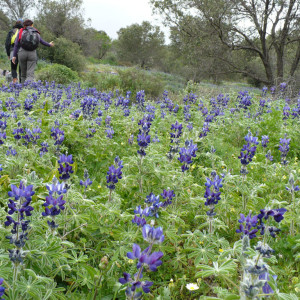 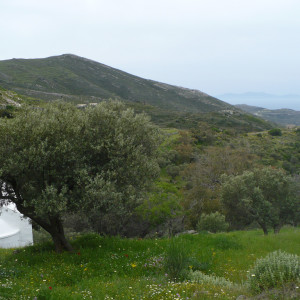 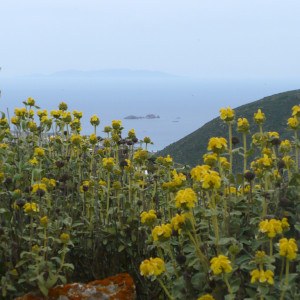 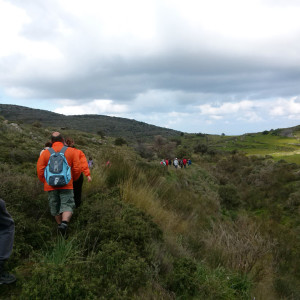 Along the way to Vounia

By the oak tree in wintertime 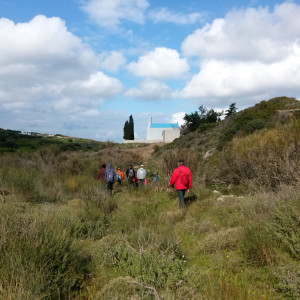 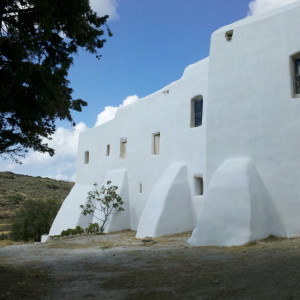 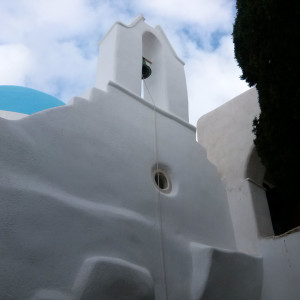 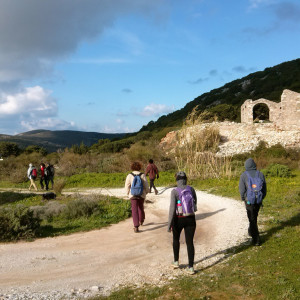 At the ancient quarries

Inside the Nymphs’ Cave 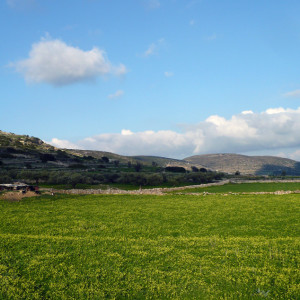 The fields of Marathi 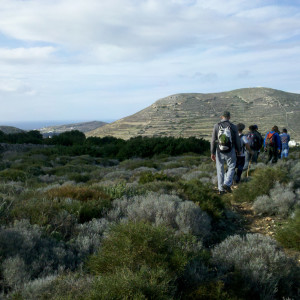 On the way to Elitas & Parikia